The gut biome is interesting enough, but bacteria colonize just about every part of the body, so here’s an experiment to measure the mouth bacteria and how the varieties shift after a visit to the dentist.

The mouth harbors its own unique ecology of bacteria, much of which is entirely unexplored. Scientists from the Forsyth Institute in Boston are at the cutting edge of the research, and have characterized many of the species found in their test subjects mouths, but widespread human trials are still years from producing the kinds of results we see from the gut biome research.

So far the research is clear that many cavities are associated with one nasty species: Streptococcus Mutans. This bug contains receptors that adhere to the surface of the tooth, creating a slimy biofilm where, under the right conditions they breed rapidly. Interestingly, just a few hundred bacterial cells is enough for it to begin its work, feeding on glucose to create a reaction that combines with the tooth enamel to form plaque. The ever-present lactic acid in the mouth, a critical component of pre-digestion, reacts with the plaque to remove calcium from the tooth, leaving small, ever deepening holes that will destroy the tooth unless the dentist intervenes with a filling.

I visit my dentist in April and October each year, and I measure my mouth biome before and after each April visit. Unfortunately I don’t have before/after for the October samples, but I do have a sample taken a few days afterwards. Let’s look at an overall heatmap picture of all the dentist-related mouth samples: 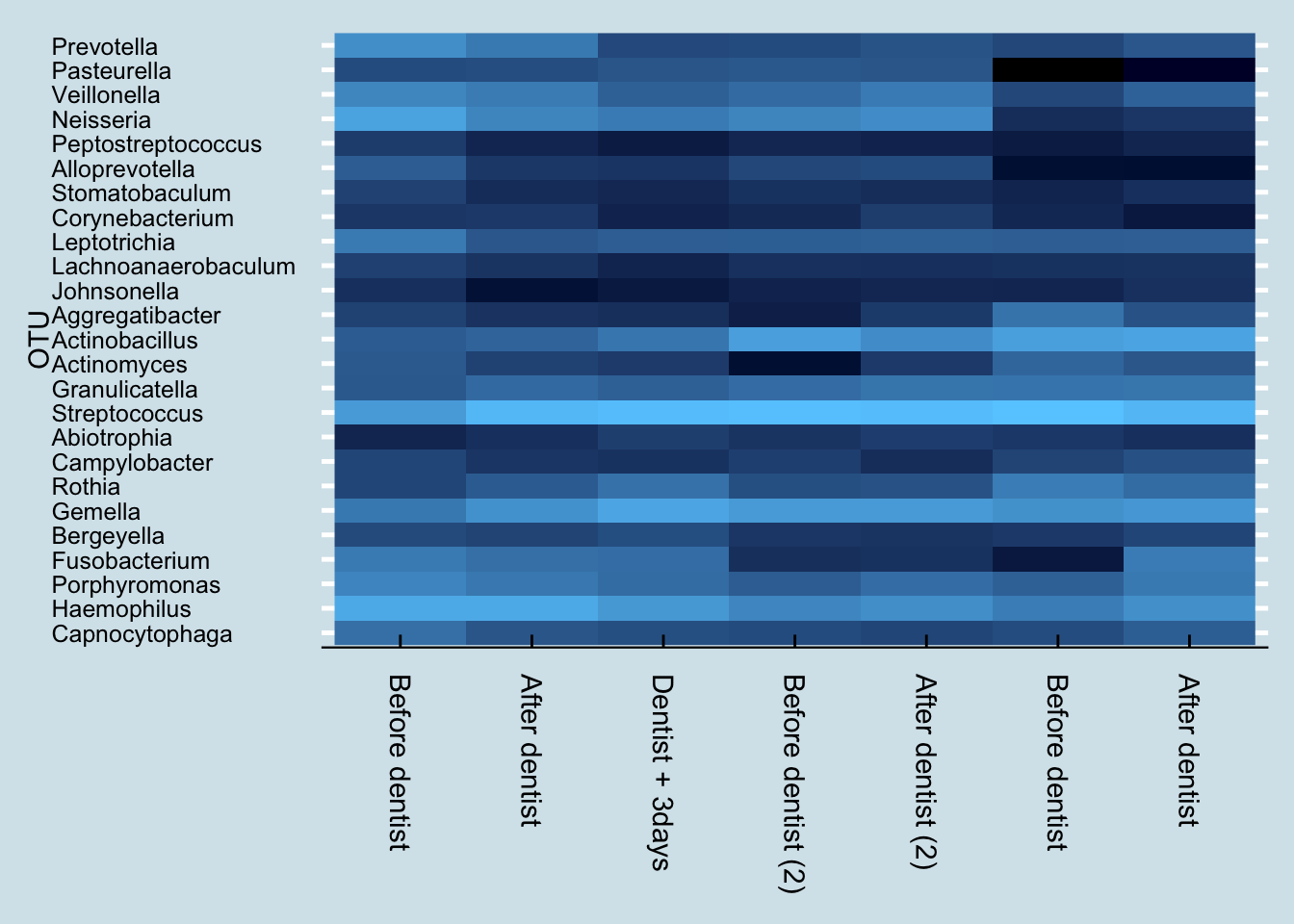 These are five samples taken over the course of one year, when many things can change. Nevertheless, the differences between the before/after samples is strikingly obvious. Despite being sampled only a day apart, there is clearly a major shift in the mouth microbiome after a dentist appointment and cleaning.

Here’s a more numerical breakdown at the genus level of the top ten microbes and their abundances before and after first visit:

The most abundant taxa, Haemophilus, stays relatively stable, while abundances of the second two taxa Streptococcus and Neissaria seem to switch places. The other taxa in the top ten also seem to drop in abundance, except for Streptococcus and Gamella.

Anything in the genus Capnocytophaga is an opportunistic pathogen, so I say good riddance. Usually they’re fine, but if your immune system dips they can turn bad.

To understand more precisely what changed, let’s look more closely just at the ones that disappeared:

All of these unique microbes are of such tiny abundances that it’s hard to rule out simple contamination or other problems with the sampling. Still, it is interesting that there was nothing new (at the genus level) in the “after” sample that wasn’t in the “before.” This is consistent with the expectation that a dental cleaning would, if anything, tend to remove taxa rather than introduce any new ones.

But that was just for a single dental visit. What happened when I repeated the experiment the following year?

Interestingly, this time my most abundant taxa is Streptococcus, instead of Haemophilus.

Like last time and as expected, I found no new taxa after the cleaning, but here are the genus-level items that disappeared, all at such low abundances that we should probably chalk them up to contamination or other errors that creep in unavoidably between the time I take the sample and when they show up in my results.

Let’s start with the genus level. How much Streptococcus has been in my mouth, and to the degree that we know at the species level, which types of species are there?

Hmm, lots of different species here. But what about the cavity-linked S. Mutans? It turns out that I do have a tiny bit, but in just one sample long ago. And sure enough, my dentist confirms that I have no cavities.

Keeping S. Mutans at bay is an important way that I’ll try to avoid cavities, so to continue the experiment, I’ll look at what I can do to manipulate the mouth biome, beyond what I eat and drink. A key part of that is how I brush my teeth.

Like most Americans, for years I brushed exclusively with one of the name brand toothpastes, usually Crest or Colgate. But looking more closely at the labels, I see two ingredients that will be of interest to my oral microbiome: triclosan96 and sodium lauryl sulfate, both of which are are known to affect microbes. In addition, the fluoride in the paste works partly by making the tooth enamel more difficult for bacteria.

Pre-modern humans didn’t have toothpaste, and certainly not the antimicrobial kinds that have become popular only in the past generation. Of course, tooth decay was a painful reality for many of our ancestors as well, but there is good evidence that serious teeth problems didn’t begin until the widespread availability of sugar after the European immigration to America five hundred years ago. Skulls of humans before agriculture show almost no tooth decay. Wild animals, including primates like gorillas and chimpanzees get far fewer tooth problems than modern people, another clue that teeth brushing isn’t the whole story.

Could it be that a healthy mouth requires a healthy diversity of bacteria, including versions of Stroptococcus that out-compete the cavity-causing kinds? But toothpaste with triclosan and other anti-microbials are wide-spectrum: they don’t target just the “bad” cavity-causing organisms. They also kill other species needed for digestion, or to control bad breath.

To find out more about whether oral diversity is a good or bad thing, for my continuing mouth experiment I changed toothpaste. Rather than continue with one of the leading fluoride brands, I switched to a more “natural” brand whose ingredient list does not contain antimicrobials.